Hacker Halted 2014: "Zombies on the Airwaves" 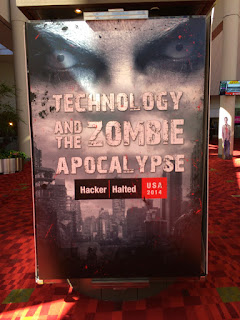 Ok...so i hinted I might be speaking on EAS hacking topic and am just getting around to updating the blog.  So here are the details if you can make it!  I'll try to be kind and post the details after the presentation.  FYI...Johnny Long is the keynote speaker along with a TON of other great ones!

Zombies on the Air Waves

50 years of obsolescence hasn't taught us anything apparently!  Get prepared for a modern day "War of the Worlds" on a scale Orson Wells couldn't have imagined!  On a typical morning you hear the familiar "EEEERRRR" tone on the radio or television and turn it up for the latest Sever Weather Advisory but instead hear "A nuclear bomb has hit Atlanta.  The CDC is destroyed and zombies are roaming the earth!"  Pretty far fetched right?  Maybe instead you hear "A terrorist attack has destroyed…insert place."  Starting to hit home?  We'll show you the vulnerabilities in the Emergency Alert System (EAS) that will allow you to create your very own emergency.  We'll show you the tools, the technology, and the joke that is security in the EAS.  But we won't stop there!  With newly mandated updates to the EAS, you'll soon be getting unsolicited messages on your phones, the internet, and elsewhere.  But with these new mandates, surely they established security requirements right?  The discussion will continue on the future of the EAS and its replacements by the Commercial Mobile Alert Service (CMAS) and other systems.  We’ll show you how these systems could be leveraged to broadcast your plea for rescue far beyond your imagination.  Even if you don't hack the EAS (and I'm not saying you should), I'm sure you'll find the discussion eye opening and engaging in an area where RF hacking and critical infrastructure collide to create one hell of a mess!

Introduction… The context... This is the writeup of a presentation I created but never gave publicly over 2 years ago.  My initial research and interest goes back at least 4 years and the exploit is DECADES old.  I'm just now discussing it because recent EVENTS highlighted the fact though they used more complicated methods. My father is in radio broadcasting and has been nearly all my life.  I grew up around 100,000 watt FM transmitters, large sound systems, COM/SAT gear, and all the junk that you'd expect from that.  I got my start in computers in a recording studio... The background… 2 years ago I was speaking with the South Carolina Law Enforcement Division (SLED), some SC congresspeople, SC Emergency Management Division (SCEMD), and others about attacks on state/local resources.  They were preparing to conduct emergency management exercises and I was given the opportunity to speak with them about "cyber" and/or technical attacks that could create o